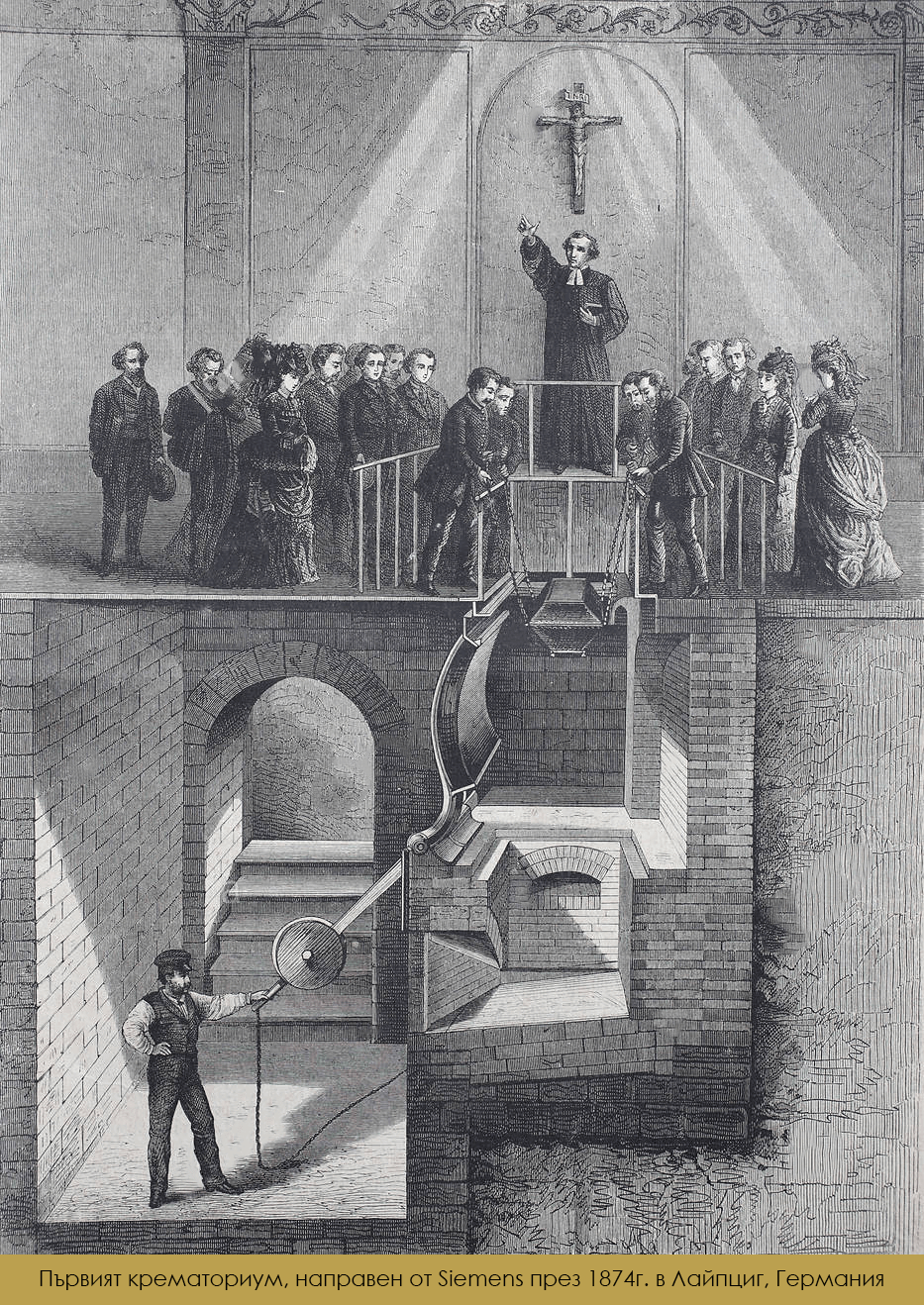 Today scientists are unanimous regarding the fact that the first cremations took place around 3000 BC, primarily in Europe and the Middle East. The cremation of the deceased was viewed by many ancient cultures as a form of funeral, prescribed by the religion. Cremation paved the way to the soul to the kingdom of the dead, simultaneously preventing the return of death.

During the last epoch of the Stone Age, cremation spread to Northern Europe, where remains were found of decorated stone urns. During the beginning of the Bronze Age, approximately around 2500-1000 BC, cremation spread to the British Isles and to the current territories of Spain and Portugal. Only the Egyptians adhered to the ritual of mummification. The Egyptians’ rejection of cremation was explained by their concept of fire, which they considered a beast. During the Iron Age, around 1000 BC, cremation became an inseparable part of the Greek burial culture. At around 800 BC, during the time of war, burning of the fallen warriors was considered standard practice.

In observation of this Greek custom, the Romans also adopted cremation. In ancient Rome, this was a privilege reserved only for the wealthy. It is a well known fact that the greatest Roman heroes - Sulla, Pompeii, Caesar, Augustus, etc. – were cremated. Around 600 BC, cremation was so widely adopted that in the middle of the V century an official decision was adopted for performing cremations outside the city limits. The remains of the ashes were stored in decorated urns, most frequently stored in urn walls, as large as houses.

Since the early Christians belonged to the poorer strata of society, the ordinary burial performed in graces was most widely spread amongst them, remaining unchanged till present day.

Around 400 AD, the common burial performed in graves, by way of Christianization of the Roman Empire, gradually became the preferred form. At a later stage of history, burial in graves gradually replaced cremation, save for cases of epidemics and wars.

It could be said that the ban on cremation in Europe was implemented forcefully by King Charles the Great, crowned later by Pope Leo III with the title Emperor of the Holy Roman Empire, head of the French Empire /Imperium Francorum/, covering most of the territory of Western and Central Europe, forbidding cremation of the deceased, under penalty of death, during the year 785 in Paderborn.

At the end of the Middle Ages the idea of cremation is reborn in connection with the requests for improvement of the burial system, resulting from social and hygienic diseases. As early as the 16th and the 17th century efforts were in place for its reintroduction. Greater impulses originated at the time of the Enlightenment, with its new philosophy striving to locate novel ways for treating mortal remains.

In this manner, before the first Silesian War, by way of decree dated 27.2.1741, Friedrich II explicitly ordered „my body be burned in the Roman fashion and buried in an urn near Rheinsberg”. Significant changes set in with the French Revolution, which fervently embraced the idea of cremation. In 1797 the „Council of 500” received a request for implementation of non-mandatory cremation, and the French Institute was assigned a scientific study of cremation. These efforts resulted in official approval of cremation in France in 1800. Regardless of this fact, the legal norms currently in effect at the time, such as the Prussian Common Law of the Land, adopt that the funeral /standard burial/ was the dominant form of funeral ritual.

Notwithstanding this fact, cremation was unfavorably viewed upon during the 19th century. Jacob Grimm, on November 21st, 1849 gave a moving lecture titled "Cremation of corpses" in Berlin, and in 1876 at the First European Funeral /Undertakers/ Congress in Dresden the first directives were developed for cremation of "human bodies in a discrete manner".

The Catholic Church banned cremation of the deceased in 1886 and implemented even more stringent clauses in 1892 under penalty of "excommunication" (cod jur. Can.1339).

Regardless of this fact during 1876 crematoriums were constructed in Europe (Milan) and North America (Washington).

During 1878 in Gotha, construction took place of the first crematorium in Germany. This facility, resulting from the joint efforts of the undertaker associations, for a long time was the only such facility in Germany. It was followed in 1891 by another facility constructed in Heidelberg. The separate states such as Anhalt, Braunschweig, Hamburg, Saxony, and especially Thuringia, facilitate the use of cremation. Other states lag behind, introducing specific prescriptions. (This specific text traces the crematorium implementation process in Germany)

Nevertheless, cremation gained more and more supporters and the number of crematoriums increased.

On 15.05.1934 a law was enacted, regulating cremation, decreeing that common burials in graves and cremation in principle were of equal rights.

During 1962, the Catholic Church, headed by Pope Joan XXIII, adopted the cremation of corpses ("Did not place a ban on cremations").

Nowadays, more than one third of the deceased in Europe is cremated, 50% in the USA, and approximately 90% in Asia.

BURIAL RITUAL OF THE PROTOBULGARIANS:

Characteristic features of the Protobulgarians of Lower Danube region are the bi-ritual necropolises. The deceased were buried there according to two separate customs/rituals – cremation of corpses and burial of corpses. The cremation of corpses was followed by placing the bone ashes in an urn (most frequently a pot) and the urn was buried in a shallow pit. Sometimes the urn was surrounded and covered by bricks or flat stones. There were also burials without the use of urns. During the common burials, the corpses were lowered in a deep grave with the head facing to the North (North-South orientation) with slight deviations to the East or to the West. Graves also existed with West-East orientation. The corpse was usually laid with arms extended at the sides. Food was placed in the grave (in pots or earthen jugs) and personal belongings (earrings, rings, tinder, horns, bone and metal amulets, and sometimes weapons (sword, bow, arrows) and the horse of the deceased. Ornamented belts were very rare. There were widespread rituals for furnishing the deceased.

BURIAL RITUAL OF THE SLAVS:

The principal burial ritual of the Slavs called for cremation. Together with the ashes of the deceased, the Slaves also placed various objects in the graves, which should serve the deceased in the afterlife. A characteristic feature of the Slav funerals called for placing of the bone ashes in an urn (most frequently a handmade pot) and sacrificial food was not placed in the grave. Slav funerals involved very rare discoveries of empty vessels, which probably contained certain liquids.